Congratulations!  You’ve found a secret short story.  “Early Bus” was originally one of the creepy tales that Alex tells the witch in Nightbooks, but during the revision process my editor and I determined that it was way too long—and perhaps too scary—to include in the final novel.  I’m happy to give my weird little story a home here, though not forever–click on the lock every now and then for new secrets!

Alli rubbed her freezing hands together and waited for the school bus to arrive.   She had intended to wear gloves that morning, but she hadn’t been able to find them.  No doubt her mom could have tracked them down—she was like a GPS for lost objects—but Alli had felt bad waking her up at such an ungodly hour.

No civilized person should ever have to wake up this early, Alli thought, yawning into her numb hands.  Especially fourteen-year-old girls who really value their beauty sleep.

It hadn’t always been like this.  At the beginning of the year, the bus had arrived at the still-early but comparatively reasonable time of 7:15.  Then some new kid had moved to town and basically ruined her life. In order to accommodate him, the school had reshuffled the bus routes, so now Alli was picked up first.  This not only meant getting up early, but enduring a tour of her ludicrously boring town while the bus made its approximately eight billion stops.

At least the bus is warm, Alli thought, stomping her feet in order to keep her circulation flowing.  It had snowed again last night, just enough to powder the street. Alli didn’t mind the snow. It was pretty.  What she hated was pretending it was morning when it still dark outside. Waking up before the sun was supposed to be something that you did on special occasions, like going on vacation. Doing it on a daily basis for the grand prize of getting to school on time was downright depressing.

Alli peeked down the length of the long road in the hope that she might see headlights approaching in the darkness.  No such luck. She wasn’t surprised—Mr. Reynolds, the bus driver, was often late, never early. Alli wished, for the umpteenth time, that she could have just waited inside her warm house until the bus pulled up. This would have been the case had Alli been the only student in this area, but unfortunately Christine Waters, a sophomore, lived four houses down.  The school made them split the difference and meet in the middle so the bus didn’t have to make two stops, which both Alli and Christine thought was ridiculous. No one had to get up as early as they did. They deserved special consideration.

Where is Christine, anyway? Alli wondered.

They usually came out around the same time: early enough that they wouldn’t risk missing the bus, but not so early that they’d be standing around longer than necessary.  Alli took a few steps into the middle of the street, her boots leaving fresh footprints in the thin layer of snow, and glanced down at Christine’s house. It was on the same side as her own, a nondescript ranch with an American flag out in front.

There was no movement.  No lights.

Must be sick again, Alli decided, and thought no more of it.  Christine was okay to kill a few minutes with each day, but they weren’t exactly friends. It’s not like she would have texted Alli to let her know that she wasn’t going to be there.

Alli leaned against a mountain of snow piled up on the curb—the winter had been brutal this year—and took out her phone. Her frigid fingers weren’t as cooperative as usual, but Alli still managed to text a few shivering emojis and snap a selfie of herself looking miserable.  Her friends were probably bored of her whining by now, but she wanted to make sure that they had something to respond to the moment they reached for their phones in the morning. She needed their replies in order to pass the time during her endless ride to school.

Alli checked for the bus again.  Perhaps the sky was a shade brighter than before, but other than that nothing had changed.  She popped her ear buds in and flipped through her playlists until she found the perfect song to dispel a silent morning.  Alli blasted the volume, moving her head in rhythm to the pounding baseline.

When she turned, she saw Christine standing in front of her house.

Alli jumped in surprise.  A single ear bud fell from her ear, leaking music.  She removed the other one and slipped the phone into her pocket.

Christine’s morning ritual was to let the screen door slam shut behind her, announcing her arrival. Alli hadn’t heard it today.

Guess I was playing the music too loud, she thought.

Alli waited for Christine to join her.  The girl didn’t move. Didn’t look in Alli’s direction.   Just stared across the empty street.

“Hello?” Alli called out, waving.  “Christine? You awake yet?”

When Christine didn’t reply, Alli almost dropped it.  If she wants to be all weird, that’s her issue.  But looking at the girl more carefully, Alli began to wonder if everything was okay. Christine had always been on the pale side, but this morning her skin was drained of all color.  She wasn’t even wearing a coat, just skinny jeans and a checkered flannel shirt.

She wore that outfit yesterday, Alli thought.  I remember complimenting her on it.

“Christine?” Alli asked, taking a few steps in her direction.  “Aren’t you cold?”

Christine didn’t acknowledge the question at all.  Alli’s phone buzzed in her pocket. She ignored it. Something wasn’t right.  Christine was acting sick—really sick—and if she stayed out in this cold for much longer it was only going to get worse.

Should I wake up Mom? She’d know what to do.

Alli turned toward her house and saw a pair of headlights approaching in the distance.

Now that the bus was in sight, she felt better.  Christine would be warm, at least, and Alli could get a better idea of what was going on.  If it was that bad, she’d make sure that Christine went to the nurse the moment they got to school.

Her phone buzzed in her pocket again.

Alli was about to check it when she noticed that the approaching vehicle was not their school bus after all.  She grunted in frustration, but as she took a closer look her curiosity began to grow. It was an old-fashioned bus that would have been right at home seventy years ago, blue with a long white stripe down the middle.  Alli remembered seeing similar buses in black and white movies where the men wore fedoras and everyone smoked. There was even a little destination sign above the front window, though the bus was still too far away for Alli to make out what it said.

“This is crazy!” she yelled to Christine.

The girl continued to stare across the street.  She gave no indication that she had noticed the bus’s arrival.

It’s like she doesn’t even hear it, Alli thought—and was immediately struck by a realization that made her gasp in fear.

The bus isn’t making any noise.

It was impossible.  At this distance, she should have heard it.  The rumble of a powerful old engine. The crush of wheels against snow.  The squeal of brakes.

The bus was completely silent.

Alli noticed other worrisome details.  There were no bulbs in the bus’s headlight cavities; instead, twin beams of light emanated from some interior source.  Some tires spun clockwise. Others counterclockwise. Neither left any sort of impression on the snow. It was like the person who designed the bus had a general idea of what it should be like but was vague on the details.

The front window was tinted, so Alli could not see the driver—later, she would be grateful for that—but the bus had now gotten close enough that she could read the destination sign:

Alli stumbled backward into the snow bank. Her phone continued to vibrate in her pocket, a comforting connection to the real world.

The bus slowed down as it passed her.

Things were happening too fast for Alli to think about them in any sort of coherent fashion.  She had to rely on her instincts, which screamed that she was seeing something that she was not meant to be seeing—that it would be better for her not to see.

Alli trusted her instincts.  But she was, by nature, a curious girl.

The bus was practically empty.  Its few passengers were spread throughout the interior, each sitting alone.  Almost all were elderly. They stared out the windows, peacefully watching the world pass them by.  They looked content, even happy. The same could not be said for the bearded man, no older than thirty, at the back of the bus.  His mouth was agape, his fingers splayed against the window as though he wanted to hold onto the world for just a little longer.

There was a bloody gash in the side of his head.  It wasn’t the type of wound that anyone could survive.

The bus came to a silent stop in front of Christine.

Christine didn’t hear her.  Alli wasn’t sure she could anymore.  She boarded the bus. Her feet left no prints in the snow.

The bus pulled away.

Alli’s phone continued to buzz.  She didn’t bother checking her messages.  She knew what they were going to say. 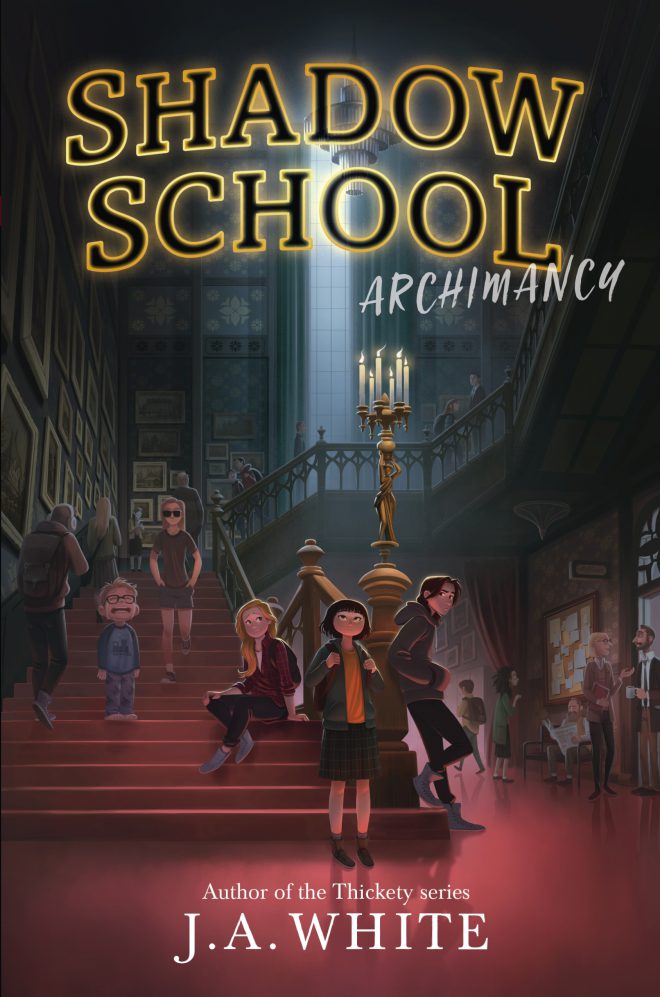