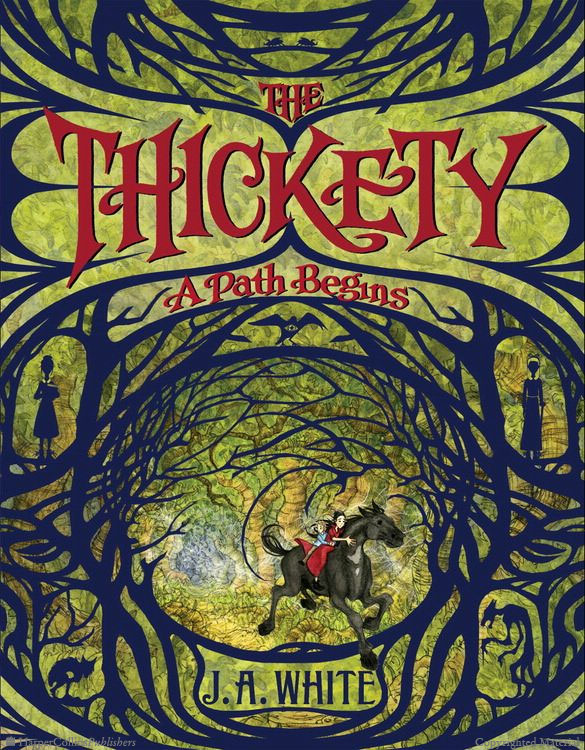 The Thickety: A Path Begins

When Kara Westfall was six years old, her mother was convicted of the worst of all crimes: witchcraft.  Years later, Kara and her little brother Taff are still shunned by the people of their village, who believe that nothing is more evil than magic…except, perhaps, the mysterious forest that covers nearly the entire island.  It has many names, this place.  Sometimes it is called the Dark Wood, or Sordyr’s Realm. But mostly it’s called the Thickety.

The villagers live in fear of the Thickety and the terrible creatures that live there.  But when an unusual bird lures Kara into the forbidden forest, she discovers a strange book with unspeakable powers.  A book that might have belonged to her mother.

And that is just the beginning of the story.

“… an elegantly written and masterfully plotted middle grade series that reads like a dark, enchanting collaboration between the Brothers Grimm and Neil Gaiman.”

“Nail-biting suspense is the hallmark of this pleasantly accomplished debut. The spellbinding story, lashings of suspense and stalwart heroine will draw in fantasy fans and keep them reading until the bitter ending.”

“White creates a fantasy world with creatures that are anything but sweet….Absolutely thrilling.”

“The Thickety is a sinister, magical debut with a marvelous and shocking heroine. J.A. White’s elegant writing and masterful plot kept me turning pages late into the night.”

“The Thickety may give you nightmares, but it is a gripping story with a great heroine.”