After my day in Milwaukee I flew back east, where some unexpected snow on the first day of spring (!?) wreaked havoc on a few of my events. Still, I was able to visit two schools in Doylestown, Pennsylvania, which was doubly fun since I’m sort of obsessed with that town. It has an old-fashioned movie theater, quite a few cafes, the great Doylestown Bookshop as well as two used bookstores, ice cream shops galore—basically everything I need for a happy existence.   I visited two Doylestown schools and the kids were particularly enthusiastic and gracious. One of the really cool things about this second book tour is that I’ve been meeting kids who have read The Thickety: A Path Begins and are really excited about the sequel, as opposed to the first tour, which was mostly, “Your book has only been out for three days—who the heck are you?” It’s nice to get good reviews and all, but nothing beats an actual kid telling me he or she finished a book of mine in a single day, or has read it more than once. 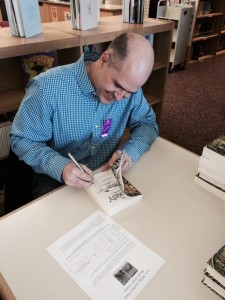 Snow cancelled my signing at the Doylestown Bookshop, which was unfortunate but not the end of the world—I figured we would just re-schedule. And then I received a text that evening about a girl who had come all the way from Washington D.C. for the event and had not gotten word it was cancelled. She had even made a special costume for the occasion. NOOOO!!! Luckily, the awesome Krisy of Doylestown Bookshop was able to schedule a time at the store that this enthusiastic reader and I could meet before she had to head back home. (If you wanted a demonstration of the personal care that independent bookstores give their customers…ta-da!) The next morning, I got to meet Grace (yup—that was her name) in person, and she was wearing this incredible one-eyed bird costume with eyes that actually changed colors—which she had made herself! I had the privilege of hanging out with her for a while and chatting, and it was fantastic fun.

And now, for the final Which is Scarier?  Totals, with the winners in bold:

(For the record, I agree with all of these!)