Although I have an extreme phobia when it comes to making my flights (I like to be at least two hours early), I’m not at all scared of flying.   Good thing, because the flight to California was as turbulent as a trackless roller coaster. Actually, I guess a trackless roller coaster would mostly just not move at all, so never mind. How about this? My plane ride was as bumpy as a camel with an acne problem.

Wow. I really hope my book similes are better than my blog post similes.
On the plus side, I had the whole entire row to myself, so I stretched out, read a little of the new Dennis Lehane novel, and played my Vita. (Final Fantasy X and Grim Fandango—retro games rule!)

My school stop the next day was at Patrick Henry School. I’m always intrigued by school architecture, and their campus was totally different than anything I’d ever seen. Instead of a single structure it was a series of smaller buildings with a lot of open space between them. My wonderful media escort for the day, Adrienne, told me that this was because in California a lot of teaching was done outside. This totally made sense and blew my mind at the same time. In New Jersey, winters are spent nostalgically remembering “outside” as that place we used to visit when we were all much younger.

Back at Patrick Henry School, a very large group of fifth through eighth graders packed the auditorium, some of them sitting on the floor. They were an enthusiastic audience and it was a ton of fun! I’ve noticed that students are very interested in how I come up with the names for the different creatures in my books, so I figured I’d share that here. With fantasy novels it can be tricky, because there’s a very thin line between “original” (Bilbo) and “silly” (Zoofie’bo). Here’s my technique. I make up a name, usually from a list of five to ten possibilities, and give it a “test drive” for a few chapters. After that, it either feels right, or it doesn’t. If it doesn’t, I use the search and replace feature on Word and try something new! 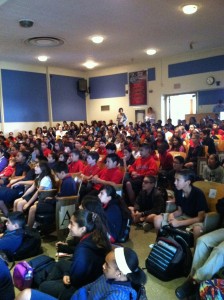 I also did my “Which is scarier?” game with the students. Apparently children in New Jersey and California have very different fears!

Patrick Henry School, Huntington Beach, CA
Which is scarier? (Their choices are in bold, with the totals of all schools in parentheses.)

haunted house vs. haunted school (0-2, I have a funny feeling this is going to be very one-sided)

After the school visit, Adrienne was kind enough to drop by A Whale of a Tale, a beautiful children’s bookshop run by Alex Uhl. I got to chat with Alex for a little while, which was lovely, and I also purchased A Snicker of Magic by Natalie Lloyd and El Deafo by Cece Bell. I have heard such amazing things about these books and I can’t wait to check them out and share them with my children. 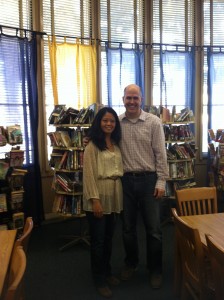 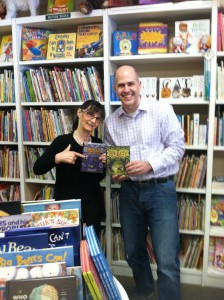 The Huntington Beach Barnes and Nobles was huge! It was a really interesting crowd, including a former student from Ridgewood Avenue School (the place where I teach) who had moved to California, and a man visiting from Australia whose girlfriend is a teacher there and asked him to get some signed books for her classroom!

I was a little worried about making my evening flight since President Obama was in town and traffic was a mess, but Adrienne got me to the airport with plenty of time to spare. I arrived in San Francisco at 1AM, somewhat befuddled and groggy but eager to visit a new school first thing in the morning!