I arrived in Milwaukee about 5PM, or maybe 4PM, or possibly 8PM. (I totally don’t understand time zone changes, and I think anyone who says they do is flat-out lying.) My driver gave me a mini-tour of the city, including the historic Pfister Hotel, which is apparently so haunted that visiting athletes refuse to stay there. He told me of a time he received a call from a prestigious client who requested to be picked up at 2:45 AM from the Pfister because he had just seen an old man wearing clothes from the 19th century. As soon as I got to my hotel—which was, unfortunately, ghostless—I had to see if he was just pulling a New Jersey guy’s leg. He wasn’t: 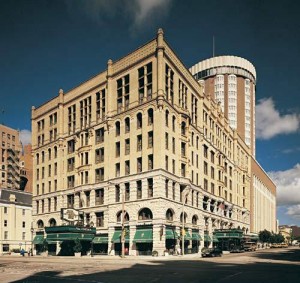 It was still pretty early, so I took a walk and found a mall that featured a fruit stand, a coffee roaster, and a used bookstore. Then I ate a big bowl of pasta. I decided that I liked Milwaukee. 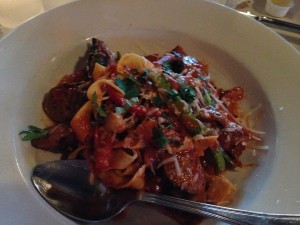 I woke up early the next morning, knowing that I had a crazy day in front of me: three school visits, a library visit, and a reading/signing at Boswell Books. To be honest, the whole day was sort of a blur. Not a bad sort of blur, mind you, more of a it’s-Christmas-morning-and-did-we-really-just-open-all-the-presents-that-fast? sorta blur.  At Pleasant View Elementary, I was floored by the amazing drawing of the Thickety cover waiting for me. I figured maybe it was an art teacher who had done it, but it was actually three students!   My next stop was Wisconsin Hills Middle School, where I had a little extra time to talk to some of the staff before my event. I’ve spoken many times about how cool it is to meet all these kids, but it’s also neat to meet such awesome teachers and librarians. I was, without exception, greeted with warmth and humor and made to feel welcome in their schools. Next, at Craig Montessori School, I spoke to an energetic group that had been extremely well prepped for my arrival—as the book trailer to A Path Begins played, one boy was mouthing the words of the narrator! 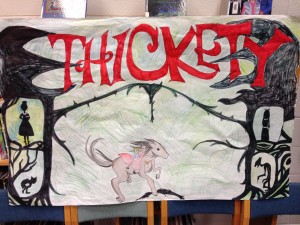 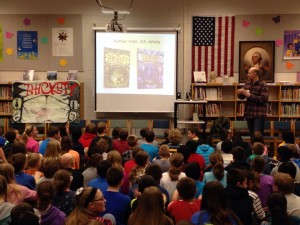 After my school visits, we changed gears and visited the beautiful Elm Grove Library. This was such a fun crowd!   Since I was unable to visit their school due to the jam-packed day, two teachers from a private school drove a large group of girls to the event. I was totally amazed by the dedication of these teachers, and the students were unbelievably smart, enthusiastic…and quite hilarious.

And then, at last, was Boswell Book Company, a beautiful independent bookstore that had organized the day’s events.   I could have spent hours browsing there if I hadn’t had to talk to people and stuff. Another fantastic crowd (is everyone in Milwaukee this polite?), and a great way to end the day.