I spent five nights in San Francisco, the longest stay of my tour by far. My wife Yeeshing was able to come and meet me over the weekend, so we had a blast doing touristy things. We explored Fisherman’s Wharf, Chinatown, checked out City Lights (a landmark bookstore), took a ferry ride past the Golden Gate Bridge at sunset, and spent half a day in Japan Town, where I had the best sushi of my life. My media escort Kevin was also kind enough to bring me to Borderlands, a hip fantasy/science fiction/horror bookshop that’s like Disney World for geeky bibliophiles like me. One of the owners of the shop let me come behind the counter and hold some of their rare books, included a signed first edition of Something Wicked This Way Comes by Ray Bradbury. Pretty sweet. 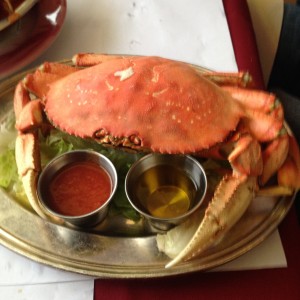 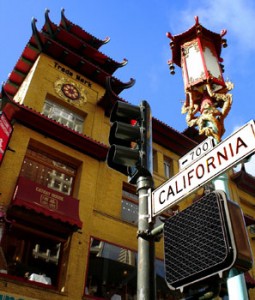 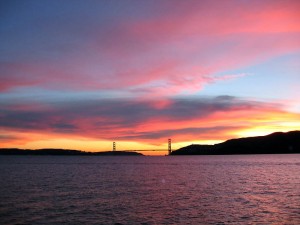 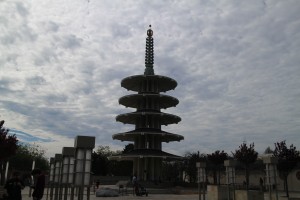 My school visits were coordinated by the marvelous Lara of Kepler’s Books, who also introduced me to the world’s greatest mocha shake and then, on a different day, the world’s greatest chocolate croissant. (If I cannot fit into any of my old clothes when I return to New Jersey—it’s Lara’s fault.)

I was initially supposed to visit Costano Elementary School at 9AM but the time was changed to 10AM due to an unforeseen conflict. It was only when I arrived at the school that I learned the exact reason: students at Costano Elementary had won a competition sponsored by Khan Academy, earning new Chromebook carts for all their classes. This was a REALLY huge deal (and rightfully so). There were balloons, cheerleaders, a television crew—even a DJ! The students had been sitting/dancing in the bleachers all morning, and while I’m not usually prone to any sort of stage fright, I have to admit I was a little nervous to follow such an amazing event. I needn’t have worried, however; the students were amazing! And, best of all, the DJ stuck around so I could make my entrance to the tune of “Thriller.” What can top that?

Costano Elementary School
Which is scarier? (Their choices are in bold, with the totals of all schools in parentheses.) 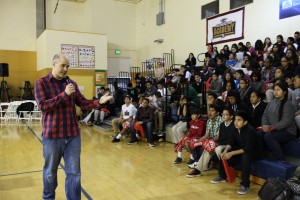 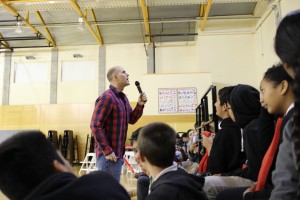 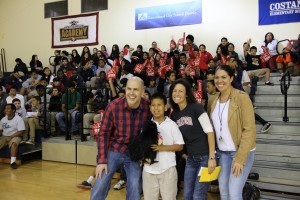 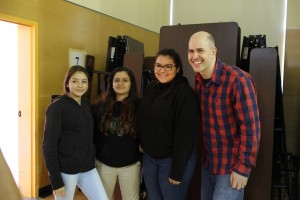 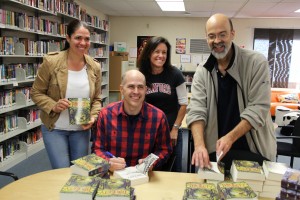 After a yummy lunch that included the aforementioned mocha shake, we hit our second event of the day, Lawson Middle School. Like all the other California schools I saw, this one was set up as a campus of small, one-story buildings rather than the single structures I’ve grown used to in New Jersey. Hundreds of students sat on the floor of a massive gym, which was pretty cool because it gave me a lot of space to pace back and forth and gesticulate wildly. Even though it was Friday at 2PM, the students could not have been more attentive, and their questions were highly entertaining.

A really strange thing happened at the end of my presentation, though.

When we play the “Which is Scarier?” game I show students a slide with two photographs on it, such as a shark and a squid, and the kids either raise their left or right hand to indicate which of the choices they find more frightening. When I got to the final slide—haunted houses vs. haunted schools—the photo that usually accompanies haunted schools was nowhere to be found. I was totally flummoxed. The students though it was part of the show—“Look! The picture of the haunted school has vanished! Bwah-ha-ha!”—but I finally convinced them that something strange had happened. When I checked my computer at the hotel that night the photograph was back in place, and everything worked fine at the schools on Monday.

I have no explanation. It was just…weird.

Lawson Middle School
Which is scarier? (Their choices are in bold, with the totals of all schools in parentheses.) 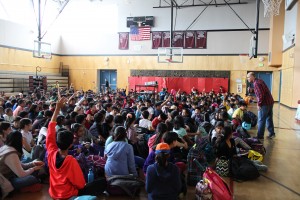 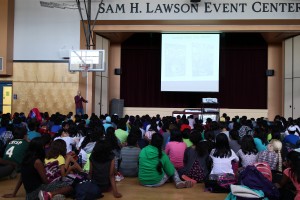 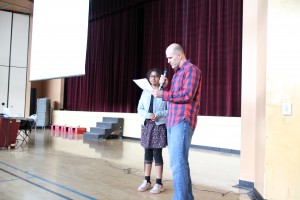 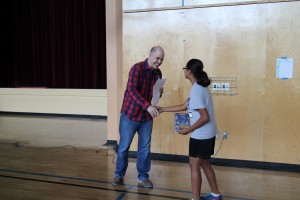 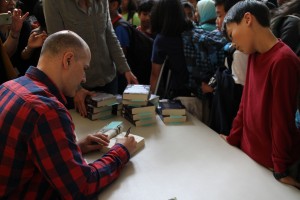 On Monday, Kevin picked me up bright and early, and after a stop at Peets for coffee and oatmeal we pulled into Blach Intermediate School. Here I met a smaller group of students in the library, which was a nice change. In addition to eight grade students, this group included two classes who were taking creative writing as an elective. As a result, their questions were far more specific than usual, dealing with everything from revision methods to writing good dialogue to how royalties work. It definitely kept me on my toes!

Blach Intermediate School
Which is scarier? (Their choices are in bold, with the totals of all schools in parentheses.)

My last San Francisco stop was North Shoreview Montessori. No gym or library—this time 80 or so kids packed themselves into a large classroom. I loved this intimate setting because it felt no different than teaching a regular lesson at my school back home. For whatever reason—maybe because of the massive amounts of caffeine I had been drinking all day—I talked even faster than usual and sprinkled a lot more jokes into the presentation.   The students and teachers asked a bunch of questions that related to the type of writing they were doing in class, which I thought was really cool. It was such a warm and inviting place; I could have spent all day there!

North Shoreview Montessori
Which is scarier? (Their choices are in bold, with the totals of all schools in parentheses.)

An early flight tomorrow will take me to Milwaukee, and then the following day is SUPER BUSY—three schools, a library, and a bookstore, all in a row! I am both very excited and a tiny bit afraid.