This was my first trip to Texas, so I had two very concrete goals in mind: I wanted to eat authentic Texas barbecue and also some awesome Mexican food. For me, it’s all about the food. Luckily, as I was soon to learn, the city of Houston revolves around food, which is dished out in behemothic portions. A match made in heaven. 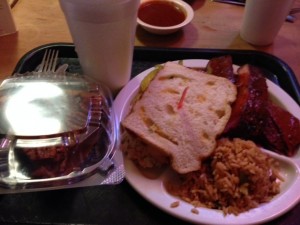 My flight landed two hours late, so I didn’t arrive at my hotel until late Thursday night. The hotel restaurant was closed, but I did manage to find a noodle joint in the shopping plaza just next door, where I had something called “Sexy Chicken Noodles.” I’m still not sold on this overly generous estimation of my dinner’s physical attractiveness—but it was pretty yummy nonetheless. 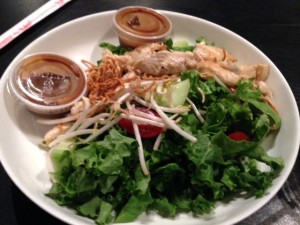 The next morning, my media escort Mary Ann picked me up bright and early. (A media escort is the hugely important person who meets an author in each city and gets them where they need to be.) Mary Ann couldn’t have been more gracious and helpful. Not only is she known and loved by, as far as I could tell, EVERY SINGLE PERSON IN TEXAS, but she also told me fascinating stories about Houston and other authors she has toured. The hours flew by in her company.

Our first stop that Friday was Victory Lakes Intermediate School, where I was completely stunned to find that the art students had decorated the entire library Thickety-style, including a corn maze, a scarecrow (by Elizabeth), two one-eyed birds (by Mason), and a beautifully drawn map of De’Noran on burlap (by Jacob). One student, Nora, even wore the blue cloak that Kara wears in the trailer, and their cool performing arts teacher, Mr. Shukis, recorded the prologue to The Thickety and played it for all the classes beforehand. (He was also kind enough to give me a copy of his performance, and let me tell you—the man has skills.) It was a joy to meet Jeanie Dawson, the remarkable librarian at Victory Lakes, who put all this together and clearly inspires a love of reading in her students on a daily basis. They are so very lucky to have her. 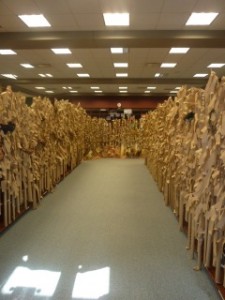 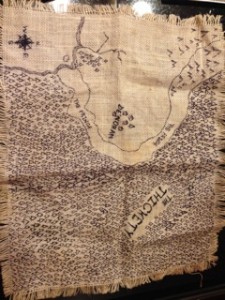 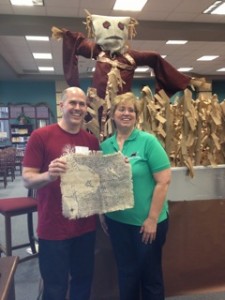 As for my presentation…my Jedi Master Soman Chainani had wisely suggested that I include an interactive component, and as he is the bestselling writer of The School for Good and Evil and I am the new kid on the block, I thought it would be prudent to listen. Luckily, the kids at Victory Lakes, an amazingly attentive audience, were totally into it. Every five minutes or so I gave them two options and asked them to vote on which one was scarier. I promised I would keep a running tally during my tour, so here goes…. 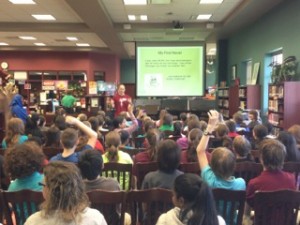 Between schools Mary Ann and Cathy, from Blue Willow Bookshop, took me out to a Mexican restaurant called Chuy’s, where Cathy convinced me—with remarkably little prodding—to try to the shrimp tacos. The good news is they were heavenly. The bad news is that Cathy and Mary Ann have completely ruined Mexican food for me in the tri-state area, because all the choices there pale in comparison. 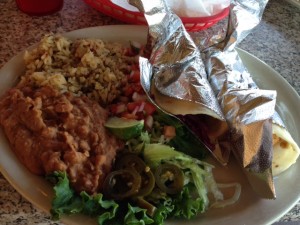 My next stop was Bobby Shaw Middle School. Here I met another extraordinary librarian, Julie Mulkey, who introduced me to a small group of enthusiastic kids for a casual Q and A. Plus, there were cookies! After this, I did a larger presentation for all the sixth graders in the school cafeteria.

The dark or clowns (once again, clowns by a landslide) 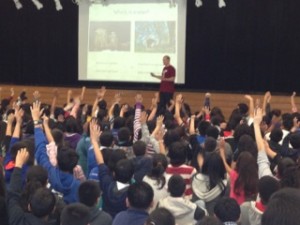 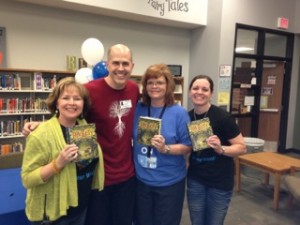 I was presented with my very own Bobby Shaw Middle School journal (which I used to make notes for Thickety 3 when I got back to the hotel that night). I also got to sign this awesome chair in Ms. Mulvey’s library, featuring all the authors who have previously visited. I’m right next to Lisa McMann! How cool is that?

We made an impromptu stop at gorgeous Blue Willow Bookshop, where I had a fun conversation with a girl named Charlotte who liked my book (yay!) and asked lots of astute questions. I also got to sign Blue Willow’s wall of authors! 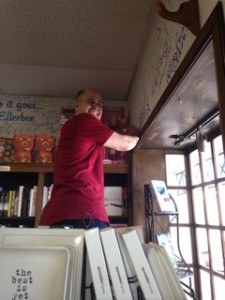 The next day, after the most incredible barbecue in the history of barbecued things, Mary Ann brought me to another independent bookstore, Brazos Bookstore, where I said, “Hey!” and signed things.  I only spent a few minutes there; I probably could have spent all day just gawking.

From there, Mary Ann and I headed out to a Barnes and Noble in College Park, which is about an hour and a half outside of Houston.   Here I finally got to meet my Twitter buddy Kelsey, who had set up an awesome signing with balloons and cookies. It was her last day of work before moving to New York—she’ll actually get there before I will. Good luck, Kelsey! 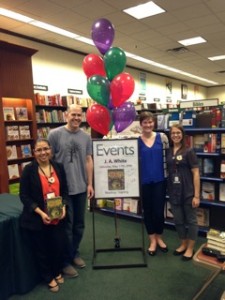